Building of the Month : November 2016

In the month of November 2016, one of the buildings from the Buildings Alive program which showed outstanding results was 30 Little Cribb St in Milton (Brisbane). Take a look at its results, and the strategies used to achieve them! 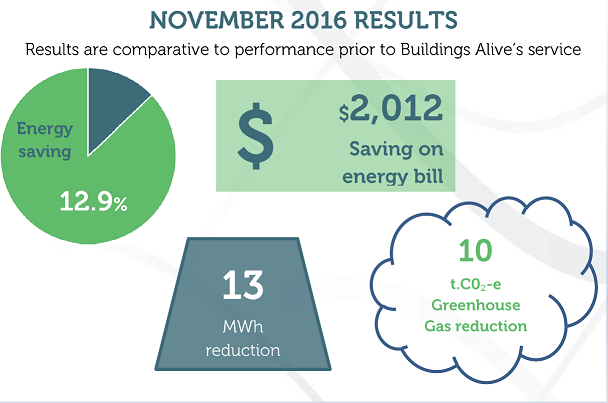 A sample day in November

30 Little Cribb’s facility management team worked together with Buildings Alive engineers to improve building efficiency. Significant energy savings were made through implementing strategies such as:

While 30 Little Cribb has shown impressive performance in December 2016, these results are even greater when seen over the period since commencement with Buildings Alive services in December 2013.

In this time, 30 Little Cribb has saved a total of $21,604 from their electricity bills, and 107 t.C0₂-e in greenhouse gas emissions. These results can be seen in the graph of energy usage (as compared to baseline performance) since starting Buildings Alive services. Lines in red represent an increase in energy usage compared to baseline, and lines in green represent a decrease, or improvement.