It’s risky to base decisions about building operations on ‘conventional wisdom’. And in this day and age, it’s not necessary either. Here’s a logical argument.

To find out we recently took a look back at the savings achieved across all of our clients’ portfolios and analysed the data to see whether buildings with lower NABERS ratings (before commencing the Buildings Alive program) have improved by more than those that started with high ratings, on a ‘normalised’ steady-state basis.

For us, this is a relatively straight-forward task. Sophisticated statistical modelling is at the core of Buildings Alive’s program of Rapid Efficiency Feedback (REF) for building owners and operators and each building’s model (which takes into account relationships between historical patterns of energy use and a variety of dynamic independent variables) effectively serves as a ‘normalised baseline’ from which improvements can be measured and verified (M&V).

Our analysis focused on Australian office buildings that we’ve been working with continuously for at least a couple of years and which had official NABERS ratings in place immediately prior to the commencement of REF. 123 large commercial office buildings satisfied those criteria. We then split the group into two roughly equal halves: those that rated 3.5 stars or less and those that rated 4 stars or more. A building in Australia with a NABERS rating of 4 stars is roughly equivalent to a building in the U.S. with an ENERGY STAR certification (i.e. it roughly equates to an ENERGY STAR score of 75 or higher, indicating that it performs better than at least 75 percent of similar buildings).

Here are the results: 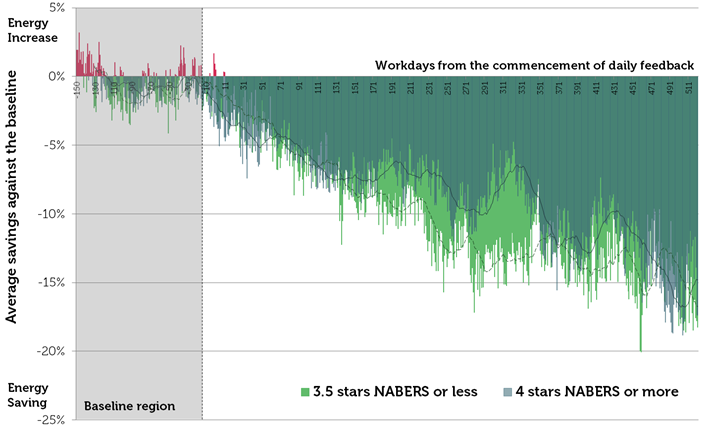 Aside from an unexplained and (statistically) insignificant mini-plateau in the 4 star+ buildings after about a year, both groups showed a near-identical pattern of continuous improvement from average 0% to 17% savings. We think this is extraordinary. Especially when you consider that their owners / operators, almost without exception, are leading real estate groups that have been committed to efficiency optimisation for many years and are working with Buildings Alive because they believed their “low hanging fruit” had already been picked. Neither they nor we expected that their facilities and operations staff would consistently achieve savings of this magnitude from better informing their fine-tuning initiatives [2].

Our tentative conclusion at this stage is that NABERS (and ENERGY STAR) ratings give a good understanding of a building’s technical characteristics and operational performance but the opportunity for their operators to further tune for higher performance is hidden. We should note that we’re looking at ‘percentage’ improvements here, not absolute savings. Lower rated buildings have saved more in energy, CO2 and dollar terms. But the message nonetheless seems clear: anyone who diligently operates a large modern building can fine-tune for even higher performance if they have the right measure of timely and unambiguous feedback.

[1] NABERS is a national rating system that measures the environmental performance of Australian buildings, tenancies and homes. Strictly speaking, NABERS Energy measures energy “intensity” rather than “energy efficiency” but the terms are used interchangeably.[2] Feedback was provided within the REF program’s knowledge-sharing and technical support framework for social learning.