Fire in the sky, but (thankfully) no smoke from the buildings

Australia recorded its all-time hottest day on Monday 7th January (40.33°C average across the continent) and in Sydney yesterday, a maximum over 41°C put office buildings to the test. We investigate whether operators were able to keep energy peaks under control on such a sizzling day.

The high temperature prompted the Bureau of Meteorology to add new colours to its weather forecasting charts. Sydney’s temperature yesterday was the fifth hottest on record, let’s see how some Sydney office buildings performed. 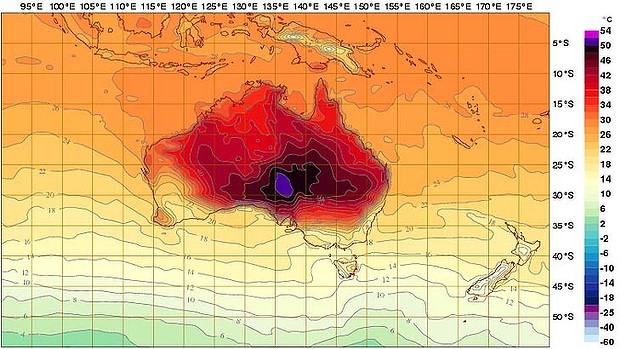 A building’s electricity consumption rises significantly as outside air temperatures go up, as it battles to purge the heat from the building and maintain cool conditions.

The image below shows a 20,000m2 Sydney building, comparing yesterday’s electricity consumption and temperature to a “typical” day in the last year. As temperatures rise, air conditioning energy demand rises, primarily from chillers, pumps and fans. 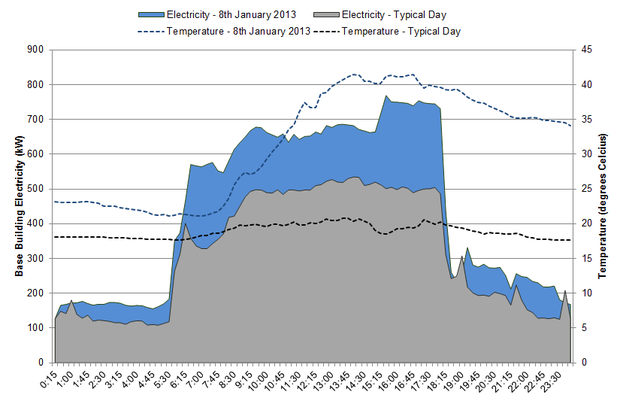 Of course, an increase in electricity consumption on hot days is expected and good year-round performance depends how well it is managed under given conditions. So, was the increase was more or less than we might expect on a 41°C scorcher?

By comparing yesterday’s electricity consumption for each building to Buildings Alive’s models that adjust for weather, we can conclude that most buildings performed significantly ‘better than expected’. Average savings were 14% for the Sydney buildings that we’re monitoring – that is 14% better than might be expected for a day so hot. This is possible because building operators have been fine-tuning energy performance over the last year, as well as the relatively cooler temperatures experienced the night before and the low daytime humidity, which also helped.

Going back to our energy archives, yesterday’s extreme temperatures were no match for the unprecedented Sydney heatwave of February 2011 in terms of electricity consumption and peak demand.

In the seven-day February 2011 heatwave 11 of the 20 Sydney buildings we analysed recorded their highest daily electricity consumption for the year, whereas yesterday (8 January 2013) saw none of the 13 buildings hit their highest consumption or yearly peak load. 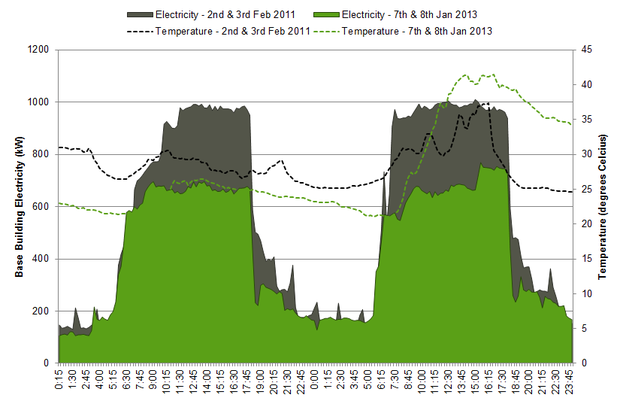 The chart above compares one typical Sydney building’s electricity profile from 7 and 8 January 2013 with 2 and 3 February 2011, the peak of last summer’s heatwave.

With consecutive hot days, and high overnight temperatures, heat is ‘stored’ in a building, so extreme electricity consumption is exacerbated. On these days, a building must not only remove the heat of the day, but also the built up heat that resides in its structure and furniture. Just like Sydneysiders will have experienced in their own homes last night.

Yesterday, the cooler overnight conditions may have taken some pressure off building services, but the efforts by the building’s operator also made significant savings. For this particular building, the electricity performance was 26% better than Buildings Alive’s weather-adjusted model indicated would have been a reasonable energy demand under the circumstances.

Are you working to manage buildings in these challenging conditions? What information and techniques are you using? Building Alive fosters discussion among practitioners and students – please feel free to ask questions or share your experiences.

Buildings Alive’s data visualisation shares real electricity data from Sydney buildings, updated daily. It provides a window into how relevant, timely data can help manage energy use. For those who visited us on Wednesday 9 January, 2013, Australian time, the visualisation was showing what was happening in a portfolio of buildings the day before, when Sydney workers travelled to work in temperatures hitting 41.5°C (107°F). This quick feedback helps show the building operators what techniques are working to manage energy use for the conditions.