Peak demand management for the hottest year on record

We’re on a record-breaking temperature trend this year: 2015 is to become the warmest year in recorded history. Global temperatures have risen for the first time to 1°C above the pre-industrial era. And Sydney’s summer has come quickly with November 2015 recording average weekday temperatures of 1.5°C hotter than last November[1].

It’s no wonder then that Buildings Alive’s peak demand forecasting tool has been warning building operators of risky peak demand situations over the past few weeks.

Many buildings are coming up with ‘peak demand management plans’ to give them somewhat-bankable demand reductions on call, and here are two great examples, one from last summer and the other from November 2015. The first shows a Brisbane building where the facilities manager asked tenants to lower their blinds before leaving the office on the evening prior to a forecast peak. This was expected to reduce solar load across the floor plate. In the morning they started up the plant a little earlier than usual to cool down the building and then prior to the expected peak period they raised the building’s chilled water setpoint by half a degree to reduce chiller energy use. The ‘summary’ message sent the following day shows the effect: 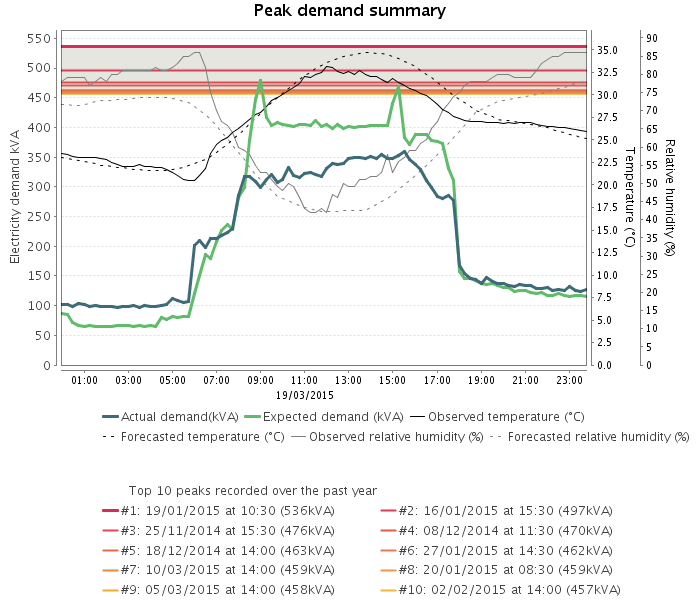 The second example shows a building in the Sydney region that reduced its peak by raising the internal temperature setpoint from 22.5°C to a ‘summer setpoint’ of 23.5°C mid-morning. There was only one spot in the building which had temperature issues, and this was quickly rectified. This strategy paid off, helping ensure that the building’s peak demand charge wasn’t reset to a level higher than the peak in the last year (421kVA).

The most common strategy we’ve seen so far is a little ‘precooling’ in the morning, starting the plant earlier to try and get on top of conditions, reducing consumption later in the day and ensuring tenants are happy throughout. That being said, we’ve heard of many buildings where tenants need to bring sweaters during soaring temperatures because of the overcooling that goes on (happily, none of the buildings we’re working with!) – so a ‘summer setpoint’ is a good approach to help lower consumption and make people more comfortable.

[1] This graph tells the story pretty neatly; though watch out for ‘enthalpy’, a concept which describes the energy content in the air (temperature and humidity effects together): 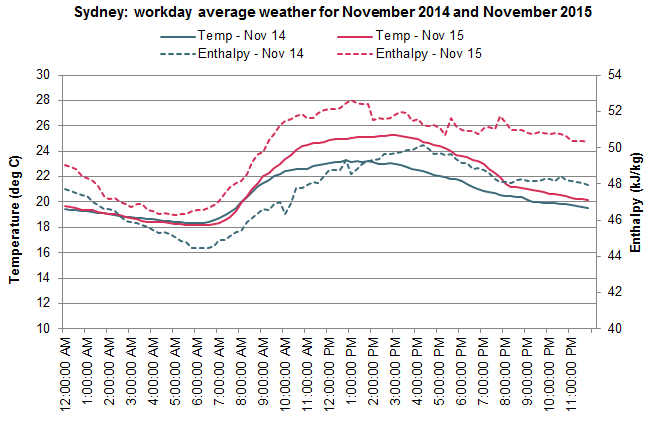