Water – too precious to waste!

Approximately one third of the water that passes through a typical office building’s meter is lost through leaks. That’s a lot of wasted water! Many of these leaks are obvious, like toilets that won’t stop flushing, but there are lots of other kinds of leaks that are much harder to detect, even with sophisticated metering devices.

Take cooling towers, for example. How do you identify a problem with a cooling tower if the wasted water is going invisibly down the drain or up in the air? It’s not easy. Cooling towers reject heat from air conditioning systems by evaporation and the rate of evaporation is proportional to the amount of heat being rejected under any given atmospheric conditions (temperature and humidity). So if a cooling tower is wasting water during operation, you won’t know unless you know how much water the cooling tower should be using.

This is where Buildings Alive’s new daily Rapid Water Efficiency Feedback (REF Water) can help. In much the same way as we do with our REF service for energy, our approach is built on sophisticated data science. We build mathematical models that can explain historical patterns of water use by taking into account weather and operating patterns. Our water models go one step further, however, by treating as an input the ‘expected’ energy demand which we derive from our energy models.

The insights are quite fascinating. Each morning Buildings Alive’s REF system issues an email message with a summary of yesterday’s water performance that includes a judgement about whether usage was higher or lower than expected, how the building’s performance compared to nearby buildings and how yesterday’s performance compares to the recent trend. It also includes a simple graphic that can highlight anomalies by comparing REF’s expected profile with yesterday’s metered data and the metered data for a comparable day in the recent past. Here is a typical example. 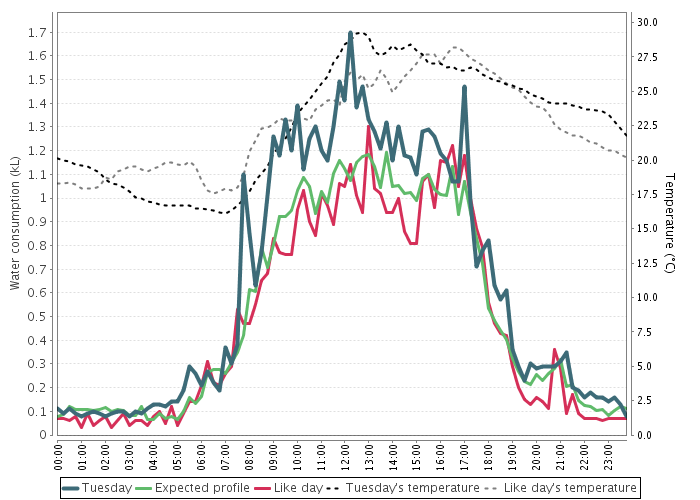 Clearly this building is experiencing a few water-efficiency issues. On the particular day in question the building used 21.4% more water than REF expected (the difference between the blue line and the green line), and yet there was no obvious ongoing leak – if there had been the profile would have been much higher overnight.  Maybe there are issues with the cooling towers? Maybe there’s a problem with the irrigation controls? Perhaps one of the restaurants is now leaving its taps running while preparing food? Who knows – but the building manager has a good chance of identifying a problem that can be easily fixed.

We are grateful to Melbourne’s City West Water for their foresight in approaching us to develop this service for their customers and we are excited to now be offering REF Water to all our clients as part of our standard package for no additional fee. All that is needed for us to help a building save water on a daily basis is access to data from a simple communication device fitted to the water meter.