What is a target range ?

Just as there is no such thing as a ‘perfect building’, there can be no such thing as a ‘perfect model’ of a building’s electricity use (or water, gas, etc.). At Buildings Alive we are obsessive (some might even say perfectionist!) about modelling, but we also recognise that it’s not possible to say with 100% confidence precisely how a building should perform under any given operating conditions.

For this reason, back in September, we introduced the concept of a ‘base range’ to our daily Rapid Efficiency Feedback (REF). Unlike a ‘baseline’, which shows an unrealistically precise energy profile from analysing historical usage patterns during a ‘training’ period prior to the introduction of daily feedback, a base range shows the range of expected profiles. We’re not the first to introduce this concept (‘confidence intervals’ are a mainstay of statistics) but our base range is considered a milestone achievement because it highlights the consistency of past performance within and between days and can therefore draw attention to what might be considered a ‘significant’ slip or improvement – precisely and to the 15-minute interval.

In October we launched another significant advance – the ‘potential’ profile, also known as ‘best in class’. We calculate a building’s potential much like we calculate base ranges and ‘best ever’ (launched in May last year and featured in a behaviour change study we presented at the ACEEE conference in August), by using machine-learning technology to analyse past patterns of performance. Our judgement about a building’s potential efficiency for any given conditions takes into account patterns we’re able to observe from comparable buildings under comparable conditions in other places, sometimes on the other side of the world.

A ‘best ever’ profile, on the other hand, only looks at the building itself and focuses on when it was operating at its most optimised under the conditions.

Best ever and potential profiles are calculated by looking at all performances up until the present, not just an historical training period. This is because we want to reflect the most relevant information and for a building where performance is continually improving, that means the most recent information is most important.

Given all the complications and complexity involved with running a building and recognising that no two days are ever exactly the same, we have just recently introduced a ‘target range’ that conveys our level of uncertainty about what would constitute ‘best ever’ performance during any given 15-minute period of a day. This is illustrated in the plot which we’ve extracted from one of the daily REF messages. 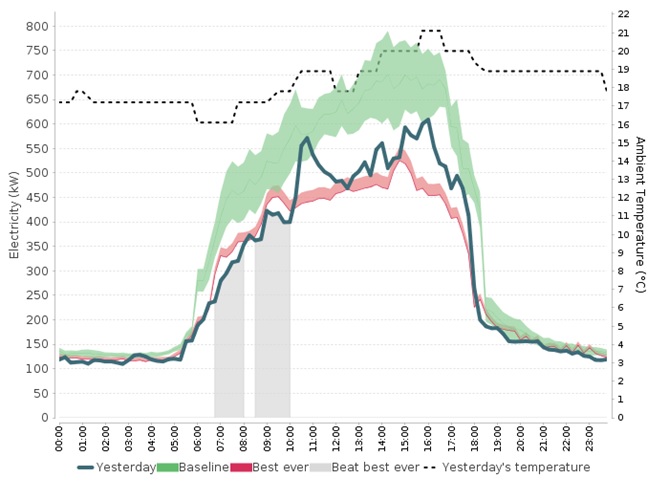 There are a few things worth noting:

Just as an athlete can only hope to achieve his / her ‘best ever’ every once in a while, the ‘best ever’ should be thought of as something to aspire to, not something to consistently beat – after all it’s a moving target! The target range is different and hopefully quite helpful. It shows when a building is in ‘the zone’, and that level of performance should be considered a realistic goal for every building under all conditions.

Do you think a target range simplifies or complicates our messaging around building optimisation, and why? We’d love to hear from you!